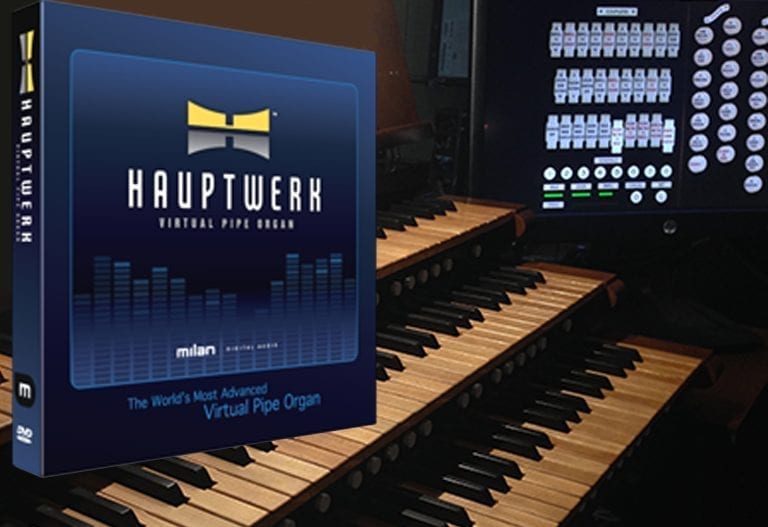 Although pipe organs are among the most traditional instruments in the world, today’s professional organists can practice and perform entirely within the digital realm, thanks to Hauptwerk, the world’s leading virtual pipe organ software application. Hauptwerk is also an incredibly useful tool for composers seeking an authentic Pipe Organ sound in compositions. In fact, if you watched the blockbuster movie Interstellar, then you’ve experienced the vast capabilities of Hauptwerk (used brilliantly by Hans Zimmer)!  Hauptwerk has been embraced by organists at home, as a practice instrument. And universities, concert halls and churches are adding Hauptwerk to their array, or, in some cases, even replacing aging – and very expensive to repair – traditional pipe organs.

One of the great benefits of Hauptwerk is that it allows organists to experience, practice and perform organ literature from well-known organs around the world found in France, the Netherlands, England, Germany, etc. The entire system is controlled by MIDI-based controllers or an organ console. The Hauptwerk software features the same functionality as a traditional pipe organ, including individual pipe stop selection, registration selection and individual control of each virtual pipe (including tuning, EQ, panning and volume).

Audio DAWg is one of the few authorized dealers for Hauptwerk in the U.S., providing complete turn-key systems.  As a professional organist himself, with a lifelong passion for electronic music and all things midi (he was a true early adopter of MIDI technology), Spunky is both a Hauptwerk owner and enthusiast. His knowledge base and appreciation of the pipe organ as the “King of Instruments” means that customers can count on his expertise and advice when it comes to creating a Hauptwerk system that is as close as possible to an actual pipe organ.

According to Spunky, “When I first heard Hauptwerk in action, I couldn’t believe how realistic the virtual organ software represented the sound of an actual grand pipe organ.  Shortly after that, the digital organ in our home was gone. I’ve set up a Haupterk organ and never looked back.” His church has also adopted Hauptwerk with a rich, bold sound system that is indistinguishable from “the real thing”.  Spunky has become known as an expert in this new technology and is here available to help design the perfect organ – for any situation.

One of the great benefits of a Hauptwerk organ is that it is extremely modular (and, thus, offers true flexibility). You can spend as little or as much as you want on your system. Any MIDI keyboard controller will work, but organists will likely prefer two or more manuals with a 32 note ago pedalboard. And, since it’s a computer-based system, a Mac or PC is required as the engine behind the system, preferably with two touch screen monitors to open and close stops, and registrations, as well as to provide other functionality. An audio interface is needed, along with multiple outputs, speakers and subwoofers. It’s an investment that will provide many years of amazing sound!