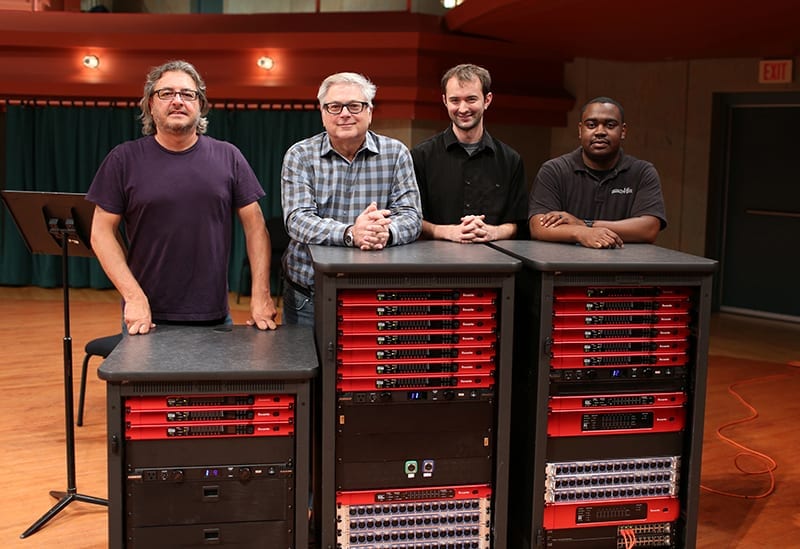 DENTON, TX – The College of Music at the University of North Texas recently completed a large installation of RedNet components from Focusrite. A total of 44 RedNet units, which act as interfaces for the Dante Ethernet-based audio-over-IP network infrastructure, now connect the school’s two main performance halls. Pictured in the Murchison Performing Arts Center are, from left, FocusRite’s Ted White and Kurt Howell and UNT’s Blair Liikala and Derek Miller.

Each hall has its own recording control room, and a portable jazz workshop, with a total of 64 I/O.

Seven RedNet 1 and seven RedNet 2 units provide the I/O interfaces; six RedNet D16 AES interfaces offer 16 channels of AES/EBU connectivity to and from a Dante audio network; a pair of RedNet D64Rs provides the link between the Dante network and any MADI / AES10 setup; four RedNet HD32R units are the interfaces that allow Pro Tools|HD users direct access to the full benefits of the Dante digital audio networking system; 17 RedNet MP8R units are 8-channel remote-controlled microphone preamplifiers and A/D-conversion for the Dante network; and a RedNet 3 connects the digital audio systems and components to the RedNet network, with up to 32 inputs and outputs and full software remote control. The system was sold and designed by A/V design and installation firm Audio DAWg (Spunky Brunone, owner) of Irving, Texas. The system installation at the University, located in Denton, Texas, took place in August of this year. 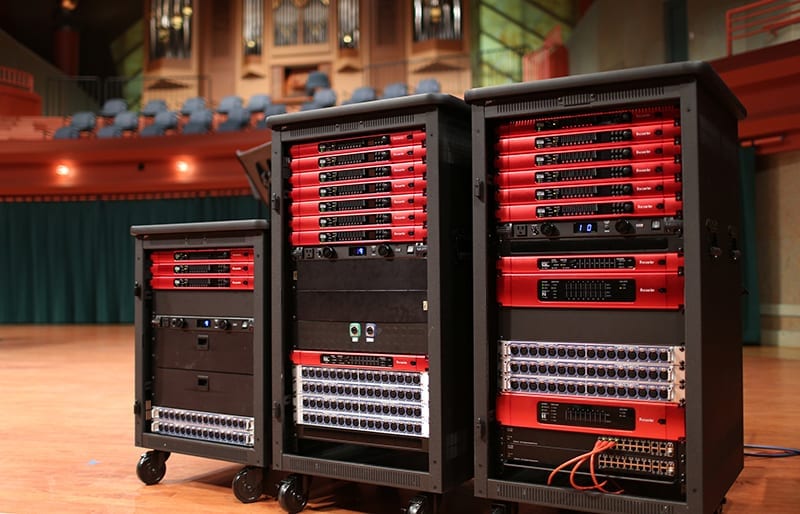 “They wanted to get the system in and running before the semester began,” says Brunone, who brought the RedNet/Dante combination to the attention of Blair Liikala, Manager of Recording Services at the University’s College of Music, about a year ago. “It was a very good fit for what they wanted to do,” he says. “They had been looking at using MADI as the audio transport format, but they already had a lot of fiber in the buildings from a previous networking system they had been using which was no longer being supported, and a lot of their hardware, such as mic pre-amps and their ProTools|HD system, could be made to work on a Dante network using the RedNet interfaces. It was just a great fit and great solution.”

Blair Liikala agrees. “We have two buildings and multiple spaces that have to be connected, as well as new equipment that was part of the upgrade, such as a Yamaha CL5 console for FOH in one of the halls,” he explains. “The jazz program has been bringing in more and bigger-name guest artists, and that’s been driving up our channel count. So we needed a good connectivity solution that would encompass the entire facility, in two buildings, and increase the number of channels we had available. The combination of RedNet and Dante did exactly that.”

Derek Miller, UNT College of Music Audio Technical Director, adds, “The MP8R’s were ideal for us for several reasons – one huge thing we were looking for was remote control of the mic pre’s, which is very simple via the Rednet control app. Also, a bonus was the built-in splitter with gain compensation, since we share the mic pre’s between FOH and recording.”

Liikala adds that RedNet’s plug-and-play nature made it easy for him and his one staffer to install the entire system, taking advantage of the campus’ existing fiber cabling. “We went from 32 to 64 channels, so that solved that problem, and the very specific nature of the RedNet interfaces made designing the system very straightforward. For instance, the RedNet D64R units act as the interfaces for the MADI that we’re using to run between the two buildings a block apart, and we can use them as two separate networks or combine them into a single network. And routing audio anywhere with Dante and RedNet is a breeze.”

Spunky Brunone says he’s been increasingly seeing the RedNet/Dante combination as the perfect solution for exactly this kind of complex, multi-space situation. “Dante offers schools like the University of North Texas a way to move audio around a big campus efficiently and cost-effectively, and RedNet has the interfaces for any type of connectivity they need. It’s a great combination.”